“Sometimes I lie awake at night, and ask, 'Where have I gone wrong?' Then a voice says to me, 'This is going to take more than one night.'” – Charles Schulz


From noon on Saturday, October 3rd straight through to noon on Sunday, October 4th, Fairbanks will again participate for the third time in the international event "24 Hour Comics Day." This is one of the more insanely enjoyable gigs that happens annually in our community that is gradually evolved into a pretty visible event for promoting comics. 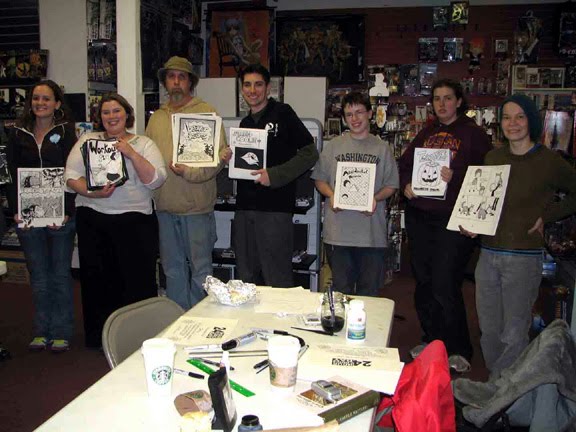 Past years a group of local amateur and professional cartoonists, teachers and students from the school district and the university plus curious onlookers met to each attempt creating their own individual twenty-four page comic in twenty-four consecutive hours. Once again it's being hosted by The Comic Shop, a fitting home for this marathon, especially since the business holds tournaments and campaigns throughout any given week for the many assorted gamers that meet there, and so there's already lots of open table space available (not to mention a bathroom). Somewhere around a couple dozen or so folks usually start out, with a total of eight people successfully completing their pages on both previous years.


Last year the work was displayed at the UAF art department's temporary gallery space in the Gruening Building, which was a very popular exhibit, and this year there'll be a setup (including highlights from '07 + '08) on partitions in the Wood Center for the whole month of October. I'm going to try and temporarily abscond with everyone's pages in order to make copies for the exhibit, which removes the stress of handling and displaying originals and also makes for a better show by resizing all the pages into a standard format. Most of us made little minicomics afterwards on our own, and hopefully we'll have an opening of sorts to exchange works.

The newspaper will again be running a special feature article on the event, as it definitely seems to be steadily picking up interest in the community, which is one of the side-benefits of exposure - spreading the word about comics to any and all interested people. Especially worth noting is the sizable audience for alternative comics (as opposed to the traditional superhero genre) given the popularity of graphic novels. Promoting the incredibly diverse world of contemporary comics has as of late become a sort of mission to me, as I'm always amazed at how many people are still unaware or unappreciative of just what's been happening and what all is out there.

Mainly though it's a chance to just get together with a bunch of other like-minded artists and do something crazy and fun. 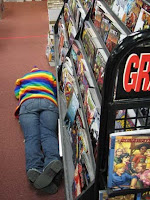 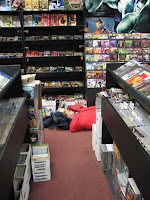 Even Anchorage is jumping in for the first time this year, and hopefully we'll see even more traffic since I put up fliers and posters all over town and campus last week. Usually folks just drop by to give support and deliver goodies, which is good since coffee and energy drinks will only get one so far. In fact, several people in attendance come prepared with camping gear in case they have to crash, or as seen here, it's amazing just how comfy the floor can get after eighteen hours or so. Frequent breaks are an absolute must; getting up away from the work and stretching or schmoozing is crucial to maintaining both sanity and consciousness. Not to mention being surrounded by shelves of inspirational reading material. And it's equally important to remember that there are no "losers" in this, and everyone's all in it together. 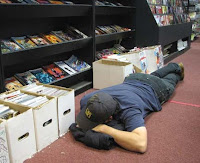 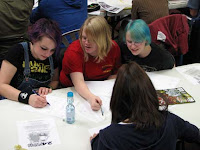 I've already been batting away several ideas about what to do for my own comic, each one better than the last, so no worries about actually coming up with something. Last year I set about documenting the entire story behind a favorite cheesecake that I bake several times a year from a recipe handed down to me from my mother, and the comic covered a bit of family history, the legendary origins of the cake's creator, and a detailed how-to section on actually making one.

The whole process involved in this 24-hour deal serves as an excellent antidote to my personal instinct of micro-managing every single last little detail long before the pen even touches the page. A vague concept and maybe some reference material beforehand, but the idea is to hit the ground running and do everything, including thumbnailing, scripting, penciling and inking, on-site. It is a definite challenge to marshal inner resources and stay focused, but besides the end result and an exhausted sense of accomplishment, it proves what one can do with one intense session of continuous output. Afterwards many projects assume a far more manageable perspective in comparison.
(original post - Sept. 23)
*Update:

"Artists from around the world have taken up the challenge of 24 Hour Comics Day since 1990, though this is only the third time it has been celebrated in Fairbanks. In the past two years, eight artists have successfully completed the challenge, including Jamie Smith, author of a number of collections of comics and creator of the comics Freeze Frame and Nuggets, published in The Ester Republic and the Daily News-Miner." - Chris Freiberg

Local artist and educator Heidi Atkinson was featured in an interview along with our host and owner of The Comic Shop:

"Collins said it’s a welcome change to see people push the boundaries of the medium rather than create more heroes in spandex.
'People that do 24 Hour Comics Day are people who read more avant garde, better comics,' he said."

Looks like a lot more folks are getting time off, abandoning friends & family and setting their priorities properly in order so as to attend what's shaping up to be another great year!

We also have a spot on the official 24-Hour Comics Day blog, and from the comment thread comes the news that now Juneau is also participating, making it a lock on urban Alaska for 2009!
at 10:00 AM