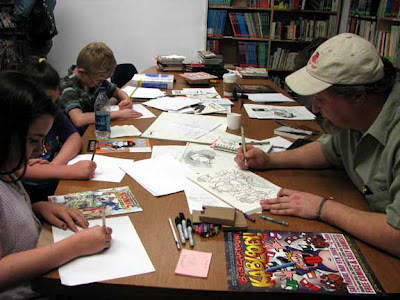 Yesterday's gig at the Literacy Council of Alaska went well enough; for a while there were an overwhelming number of cartoonists (14 total) versus attendees, then a pretty decent sized crowd started filtering in; eventually the ratio flipped around and the few of us left got outnumbered by kids, which was fun. Intimidating sometimes, and it makes you appreciate the distinction between us and say the performing arts, or musicians, who have to be "on" all the time in front of an audience. 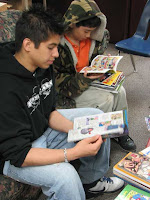 But then again, this wasn't a whole lot different from hanging out with like-minded friends or camping out at a cafe or bookstore with folks checking out what you're doing. Something I obviously have a lot of experience doing anyways, just in a different place; a well-lit healthy environment surrounded by a more people (and none of them drunk). It's like a reunion, except that you actually are happy to see everyone...
Showed up early to set up tables and get the room ready, but bookstore manager Hannah Hill was already on the job and had gone over the huge mountain of comics donated from the Comic Shop. There were a few different stacks sorted according to age-appropriate material, and again I was really humbled at just how many books were there, so thanks again Kevin! 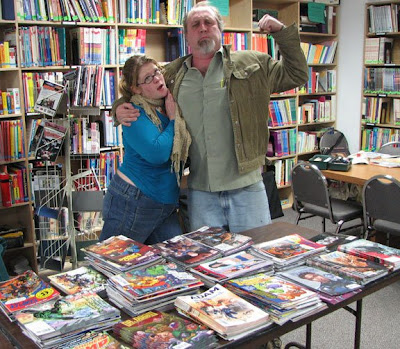 We probably went through 2/3's the pile, with kids encouraged to load up with whatever caught their eye, even to give to their friends. I had hauled along a sack of contemporary graphic novels and a portfolio for show & tell to the adults, and was happy to see lots of other examples of cartoon originals on display too. 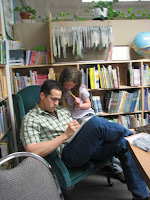 Layla Lawlor (creator of many amazingly awesome efforts), Jennifer Bruce, Sam Saylor (all the way from Anderson), local educators Robin Feinman, Jeanne Armstrong and Heidi Atkinson, university students Andrew and Isaac Paris, Chris Green, Elizabeth King and Kim Streeter, and editorial cartoonist Dan Darrow all came by and hung out for a while. Just like the comics, this group of cartoonists were a huge range of talents and styles - something and someone for everyone's tastes. The diversity on display was very illustrative of just how open and interesting this medium is; so many different ways to tell a story, or in my case, a bad joke...

Friday's newspaper article listing the gig in the community calendar of events was already spiffy enough, but to top it off a News-Miner reporter and photographer showed up to cover the event, which resulted in an awesome write-up in the Sunday edition. Good exposure to spread the message: the ultimate goal was to get more folks aware of and involved with one of the coolest non-profit community groups in town. Mission was accomplished as many visitors had never seen the building or knew the scope of different activities and range of programs the Council offers. 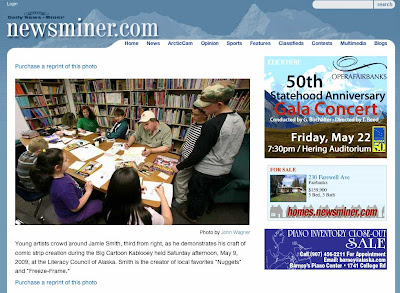 Amanda Bohman, the newspaper reporter covering our event was really interested in what comics were about, and all the range of different styles and genres, and spent a lot of time interviewing the attendees and getting lots of information about what they were drawing, how and why. And the staff photographer (John Wagner) took a batch of intimate portraits as well as documenting the whole kablooey. 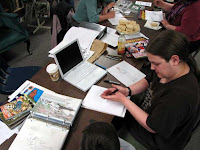 Besides learning about the Literacy Council itself, this was an opportunity to entice and educate with comics. Kids, parents and teachers can take advantage of this as an educational tool, and beyond that, visual literacy is also another angle. Based on my experiences volunteering with the annual "Guys Read" gigs, nevermind how many youngsters ever see other adults reading or are read to; it's rarer still for them to see and watch artists create and take a turn at it themselves too. 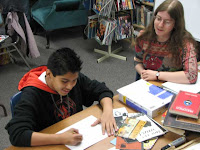 With hindsight, I shoulda played the other ace up my sleeve with the onomatopoeia exercises using Don Martin sound effects and another idea culled from Mort Walker's claasic and hilarious reference book "Lexicon of Comicana." Playing around with the power of the written word was supposed to be a featured attraction at this event but the combination of being overwhelmed at turnout and then burnt out and useless kept me mainly doing demos and circulating around making sure folks were doin' okay. At one point in the day I was just blown away at the great turnout, so in some ways the timing and logistics weren't together enough to get everything done it originally hoped for. Next time I'll have a better grip on a game plan, and introduce some other elements - like the Grawlix game... 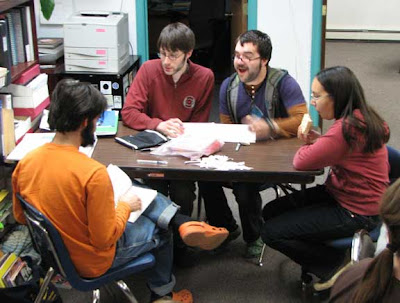 As it happened, everyone seemed quite content to sit around and sketch and catch up with each other, Folks were welcome to just wander around after checking out the racks and stacks and see what the cartoonists were up too. With enough coffee and ginormous slabs of rice krispy treats, creative juices started to percolate around the room, and everyone was pretty much in their own groove, doodling away at the several tables scattered about. Several outstanding and aspiring talents of all ages came by and participated my personal favorite was this piece by Conor Esslemont (who totally out-doodled everyone by cranking out a batch of gags one right after the other). 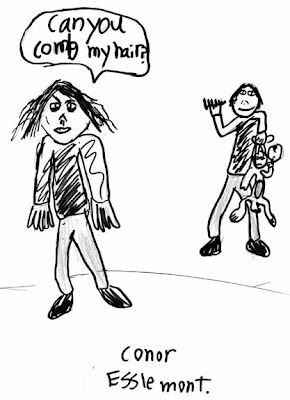 Man what a kick in the cartoon pants to sit around in a room full of such energy and enthusiasm. Or, as participant Jeanne Armstrong put it best in the newspaper article: "It just infuses me with a terrific feeling,” she said. “I’m laughing. I’m with other creative people. I’m inspired.” Not that I'd have been doing anything much different on a typical Saturday afternoon anyways, but a real good recharge to connect with others interested in the same thing. So it'll happen again, and I'm already looking forward to it, plus this was a nice ramp-up into the upcoming Summer Session course that'll kick into gear here pretty soon. 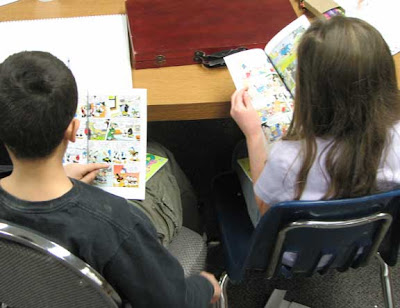 So many thanks once again to everyone who helped out, participated and dropped in to check it out! These are the kinds of things that just keep rippling outwards, touching people and changing lives. All it takes is chucking in a few more rocks every so often. 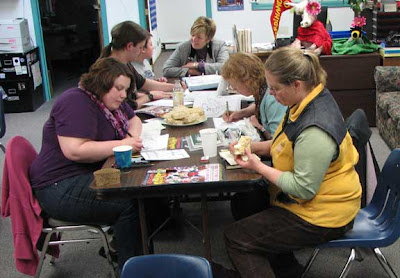