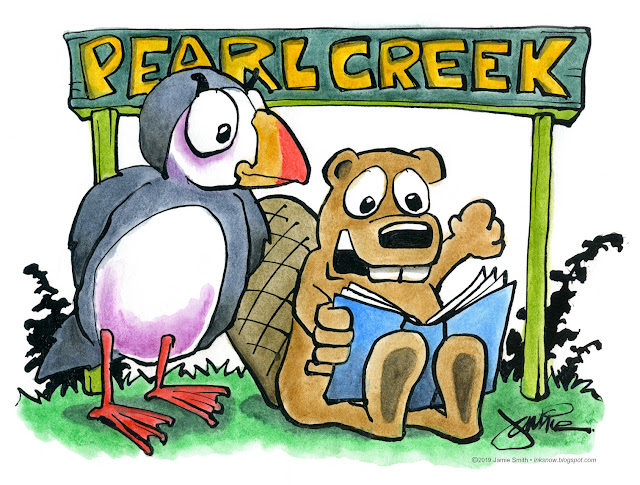 Here's some highlights in retrospect about a pivotal experience I had during my continuing adventures with the Fairbanks Arts Association's "Artists In Schools" program - a first-ever stint with an elementary school. 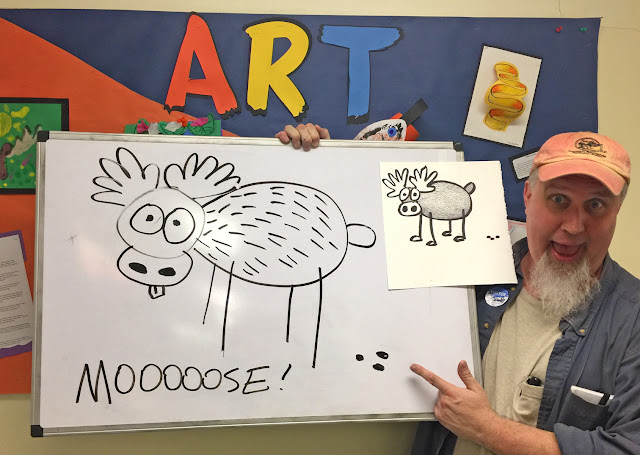 Though I spend a fair amount of time in random classrooms, and do residencies for other organizations, previous to this gig, my policy had always been to restrict any residencies to the highschool and junior-high, and ever since getting certified that's been my basic MO.The reasoning behind that was after spending so much of my professional life advocating for comic arts to be taken seriously as a legitimate medium, it seemed like kind of a step backwards to teach little kids how to draw a cat based on circles and triangles. Except my wife astutely pointed out that in fact, that was exactly what I did in my own work. Huh.


Plus all my years teaching at the Visual Art Academy should have clued me in to how rich a vein of comparatively incredible amount of energy + passion was waiting just below the surface of this arbitrary age restriction. Always humbling to realize that you are still teachable - which usually occurs after admitting that one was wrong.

That being said, I did ultimately have to abandon some of my lofty aspirations and goals, namely the usual culmination of of works being published in a comic book, with the best single-panel gags, editorial panels, strips, collaborative and individual pages that I closed out my traditional cartoon and comic art courses with. Likewise I learned to take my expectations down a few notches while paradoxically upping the level of output + intensity of time. This meant no meticulous rendering of forms using textures like cross-hatching or using dip-pens etc. How easy it is to forget that for many folks it can be a simple victory to successfully orient the point of a pen onto a piece of paper so as to make a mark. And the innumerable intermediary steps such as remembering to tell them to take the cap off of the marker, and to remind them to replace it afterwards - such supposedly minor details long taken for granted or assumed when instructing others.