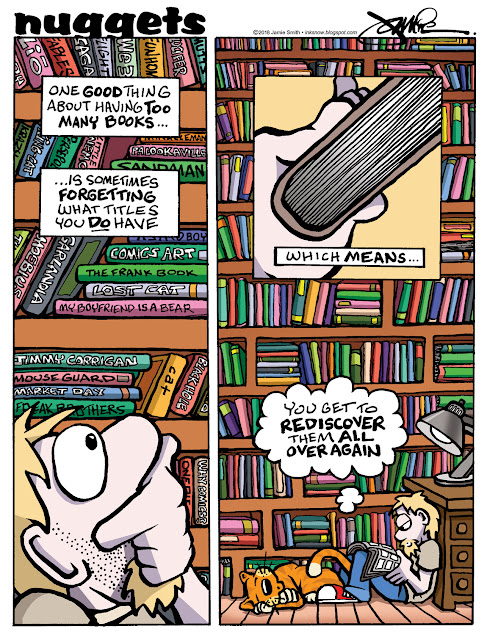 Here's a kinda special piece: It actually won't appear in the paper as it's not really anything Alaskan related. Another drawback is it's not a very general message that would appeal to many folks who either A) know me personally, B) are cat people, and C) are into comics (hence the detailed covers in the first panel). And it's now not gonna be used as it's original intended purpose as a promotional/benefit poster for the Literacy Council of Alaska either. It has since then been supplanted by an even more epic image - stay 'tooned for more details... but in the meantime enjoy it as an exclusive to Ink & Snow readers. 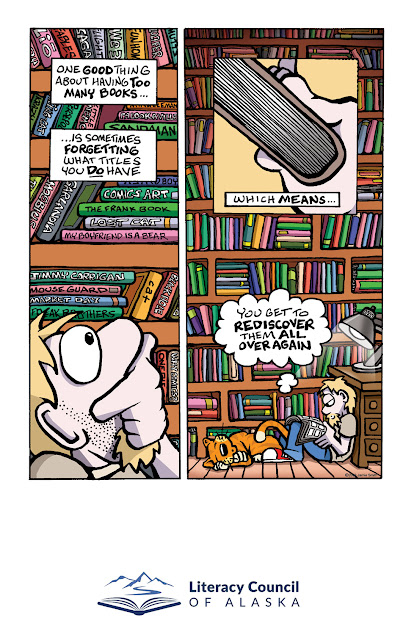 Geek alert: One neat detail in the process of this piece was the sudden realization of how much more effective it would be to flip the inset panel of the book-in-hand, as compositionally it really enhances the viewer's gaze through the overall page by redirecting it back down to the closure section. Whatever.

This one was pretty much a labor of love... as in all of the hours that went into coloring it. I really love the inherent simplicity of the concept though, and can point to personal inspiration occurring on an almost weekly basis. There are books that I regularly re-read every single year, returning to favorites in much the same way I rely on classic soundtracks on the studio - not to mention both movies and meals. And yeah, all the actual titles were taken from peeking around the computer monitor at the wall of books right behind me.

Regular readers will know how important literacy is to me as perhaps one of the most fundamental issues. From Read Comics Day to the Big Kablooey, to tshirts and posters and Guys Read, the work of the Literacy Council of Alaska is so important! 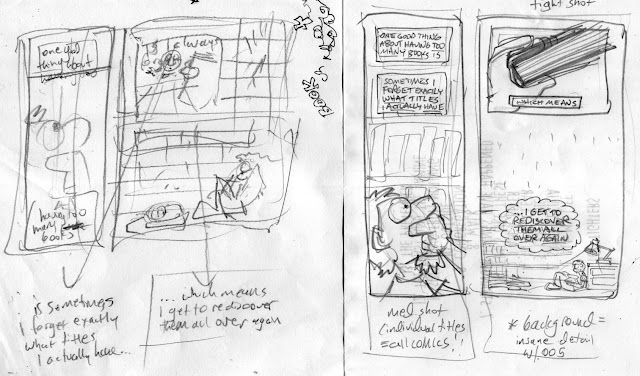 Behind the scenes: drawn at 100%, so as to fit the original into a pre-cut mat (lazy) to submit (framed + ready-to-hang), which didn't work out (see below). Penciled in with a Blackfeet Indian #2 + mechanical pencil (0.9 lead as the finer ones are useless due to fragility + breakage) for the book titles. Inked with sumptuous Sennelier “A la Pagode” Indian Ink, using Speedball No. 512 nib (w/Brause wooden holders) for the medium-weight lines, and a 513EF on the foreground figures and shelves and book spines in the first panel + crow-quill for the book spines in the second big panel. Also used the trusty Microns: .o8 for ruled borders, .05 lettering, .01 and .005 for spine lettering and superfine details.

On a meta-note, I used this piece as an excuse to play with some new sets of water-soluble wash pencils, and wound up creating an absolute disaster... as in I was really bummed that it didn't even remotely come close to what I envisioned. But hey - once again it proved to be a prudent insurance policy to back it up with a scan of the line art before ruining the original. I mean, I'll for sure eventually get over it, and sure enough there will be someone else out there who will prefer it to the published, digital version. 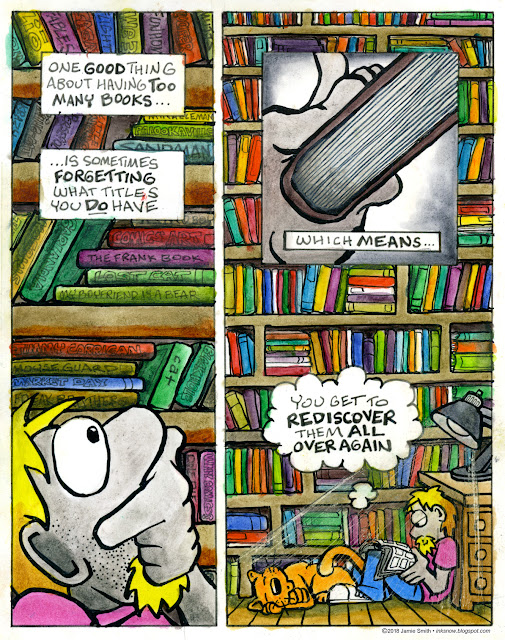