By The Numbers: “How long does it take you?” 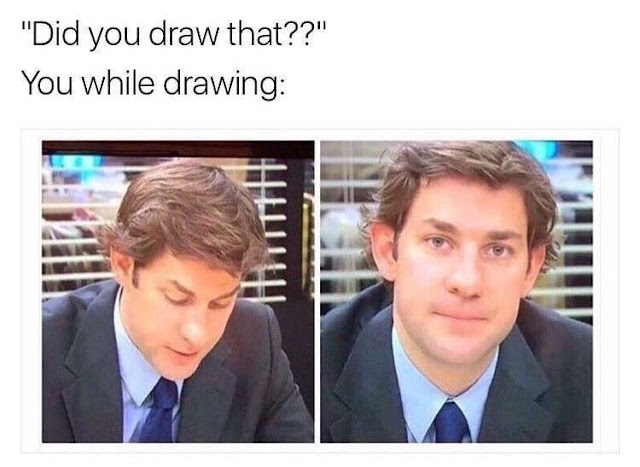 Probably the most-asked question while doing demos, second only to “Where do you get your ideas?” Been a while since I devoted inordinate amount of attention to the nuts + bolts… I’m pretty happy with the pinned pages over on the sidebar about process-themed posts, and there’s never really been anything new to add. Except while in the throes of a recent binge session catching up with the regularly schedules material, and plugging in holes in the production pipeline, there was a noticeable contrast in a few pieces. So I did in fact take the time to keep an eye on a timer, not like racing to beat the clock, but just to get a ballpark approximation. This included occasionally spacing out, internet surfing breaks, peeing off the porch, coffee refills etc. You know, just like a real job (/s).


Taking a batch of five new panels, it became apparent that the average length of time it takes is about two hours, give or take a half-hour. There’s no possible way to quantify the creative process behind coming up with the initial concept – that could be spontaneous, or a protracted struggle with constant edits of rewrites/redraws, or temporary incubation while awaiting a possible better take. In fact all of those happened during this recent spotlighted session of ten new pieces. Also there was the usual random mix of complexity: some were comparatively simple compositions, others buried alive with detail, and a couple that were multi-paneled strips as opposed to the usual single-panel gag format. None were in color, not that that is as much of a factor digitally – as opposed to watercolors, which incidentally accounts for a jump in pricing of original artwork.


Penciling takes a half-hour. Inking takes 20-30 minutes (including using markers for first dropping in a ruled border + text for captions/dialogue, then a dip-pen w/India ink on the art). Scanning and subsequent cleaning up is another half an hour, which also covers dragging guidelines in to square up/level off image, tweak lettering, search & destroy missions to track down any errant pixels for deletion (after threshold conversion there’s usually plenty of digital breadcrumbs scattered about). Shading in, the final stage before exporting to various printing & posting formats, takes anywhere from 20-40 minutes. All “tolled,” a couple hours. 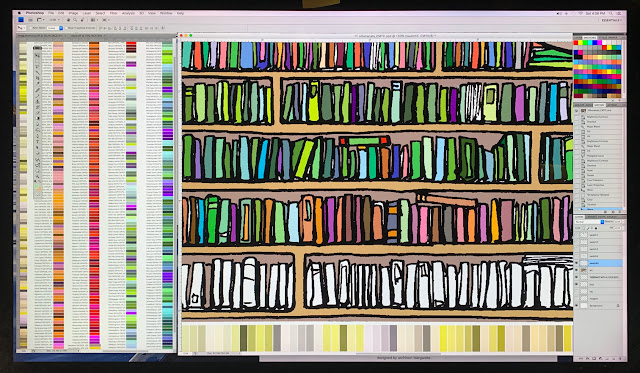 By way of contrast, a large, monumental piece I recently finished for an upcoming benefit event took several days (posting a couple teaser shots here: as a hint, since it involved 656 books it probably has something to do with my pet cause of literacy), including a couple obsessive 12+ hour marathon sessions. The degree of complexity was such that I couldn’t possibly pull off the usual MO of “artistic deficit disorder” and expect to bang it out in one sitting – though I tried.


But it stands as testament to how amazing things can turn out if you just slow down and take time. Now that’s completely relative, as for example; the joy of hand-lettering that involves consciously crafting and every individual letter, taking into account line weight, spacing within the word itself, and the surrounding sentence and/or paragraph, all within the confines of a caption box or speech bubble or thought balloon, and the overarching composition of the panel and/or page. Even though it’s a matter of minutes, it still takes time.


I also have been sporting a new cap, which is now for all practical purposes a uniform. For many years my pet peeve has been an inability to work without wearing shoes. That gave rise to the Mr. Rogers theory of preparing to spend time in the studio with the habitual routine of changing footwear. But I finally found a company that makes the exact style I prefer and of good quality as a decent price. And it just-so-happened to be on my head for a trail run during this most recent concentrated stint behind the drawing board, and so it stays. 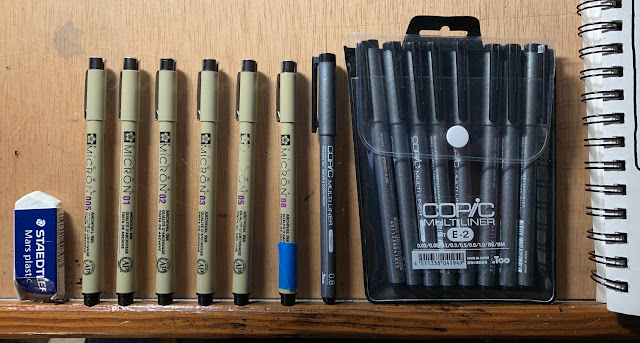 Another key resolution for this year (not a conscious, deliberate New Year’s thing, the timing just sorta happened to work out that way). It goes hand-in-glove with the first tectonic plate shifting under my usual process noted in an upcoming earlier post: when inking in panel borders with a ruler I’ve always traditionally done it as the last thing, as it ties everything together and neatly encapsulated the piece. Trouble is, at least half the time I wind up dragging the marker tip through a spot of undried India ink and that goops up the marker tip. I have always used a Micron 08 nib for the lettering, and for the linework when dropping in the panel borders. This because it’s a subtle aesthetic contrast to use a mechanical line (a “dead” line) as opposed to the more organic, varying line weight of a dip pen. Plus with the latter I can really blaze across a page, much in the same fashion as the truly old-school practitioners did (and still do) with a brush.

Another aspect of long-time usage of Microns has been the annoying tendency for the solid black to lift slightly when erasing, even after drying a while. Even using the usual plastic eraser (Staedtler brand in this instance) it rubs off enough of the opacity that it becomes a noticeable issue, and I resort to doubling down on work-overs so as to offset it. Plus I worry about fading over time in an archival sense too. Bonus: There’s an even thicker nib in the B-2 set I just purchased: I usually use an 08 Micron when ruling out the border & lettering text – I’ll try using this 1.0 instead. Nice bold line weight.

Update: Actually after initial excitement the 1.0 has been disappointing – starting to crap out as in dry enough it takes several slow passes using the ruler to get a good border. Lots of times the problem is long shelf life by the time it gets to Alaska. So I’ll still get another set… not to mention a lot rides on how it holds up after erasing.

Update #2: Very pleased with how the solid darks and more delicate lettering held up. I use a pretty soft plastic eraser, which is a best-case compromise between really getting the penciled sketch marks gone without a trace versus rubbing off some marker. I always try to remember what I lecture my students about: sketch lightly – that takes a degree of finesse and dexterity, plus an awareness and sensitivity to what you are holding in your hands. Hand-crafting is at aesthetic odds with our contemporary push-button culture of clicking.