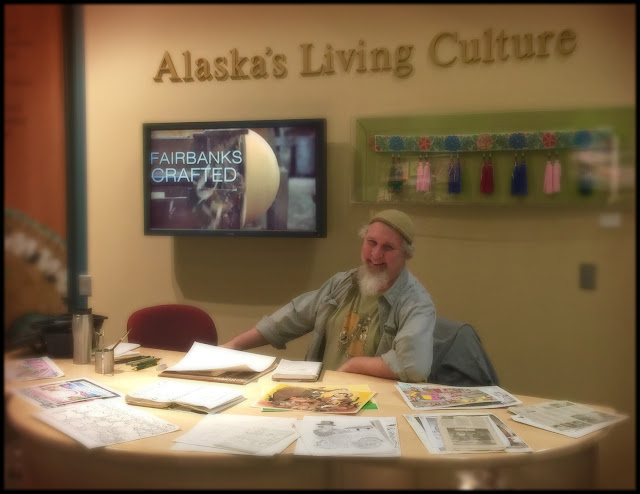 Year-end cleanup in the backlog of mothballed posts. I still owe you folks a follow-up to the epic experiment with my month-long/weekends residency down at the Morris Thompson Culture & Visitors Center that I pulled off last year at this time. Over a hundred folks dropped by for the First Friday opening, added to the other hundred already there, which was in all respects a decent turnout given that I had just had an opening + show just the month before, and there was an insane number of other events going on around town that same night.


"February’s Artist of the Month is Jamie Smith, creator of the Alaskan cartoon feature “Nuggets” which has been appearing weekly in the Fairbanks Daily News-Miner (Sunday edition) since 1988. He does freelance illustration out of his cabin and teaches studio art classes in drawing and cartooning at the University of Alaska Fairbanks, along with artist-in-schools residencies. In addition to the pieces on display in the exhibition hall he will be doing live, on-site public demonstrations of drawing and showing samples of works-in-progress in the lobby each weekend of the month from 8am – 5pm." 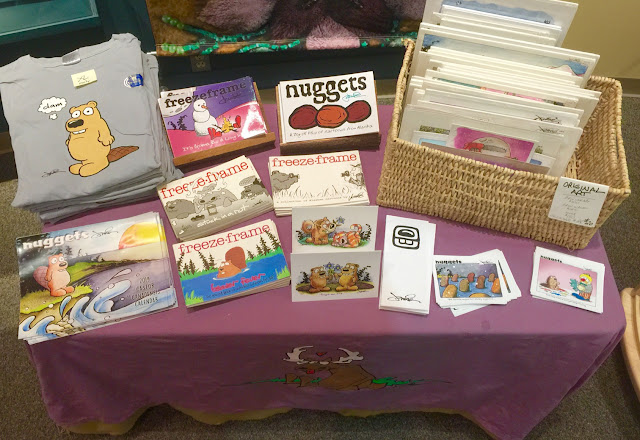 Here's a shot of the layout on my little side-table which supplemented the main table of show & tell/demo material. Clearance items included remnant tshirts, the catalog of books (five titles currently in stock), the new "Castor Canadensis" calendar, some random card designs and a selection of original artwork. That varied from black & white/pen + ink line art, to black & white/wash, and finally full-color/watercolored pen + inks. These also reflected my new prices which went into effect this year: $100/$125/$150 respectively. There were also on display some free samples ("business cards" panels which sported contact info on the back side) and the new tri-fold portfolio showing some of the many clients and businesses that have commissioned logos and such from me.


What was different about this gig was pushing the boundaries of expectations for an artist-of-the-month. I frequently lament the passive nature of artists who conduct shows like it's a latent opportunity that will magically, spontaneously attract viewers and interest. The vast majority of the time our artwork is about as effective as a mounted trophy: the work is dead. It sits there like an inert background ad in a bus station - more often than not just ignored amidst the aesthetic din of the daily commute. Instead of putting up and walking away, work it. I challenge artists, and my students, to look at an exhibition as more of a residency: it's an opportunity to directly engage and cultivate relationship - however fleeting - with viewers. It's a potential space that can be utilized in a myriad of creative approaches: private receptions that cater to specific, targeted special interest groups. Hosting topically related or thematically associated events, even "Final Fridays," anything to squeeze every last possible interaction with the public as possible.


You never know who, when or even why sometimes a connection is made. This is not to sell anything, as most folks have a healthy aversion to someone randomly peddling wares on a sidewalk. What artists have to offer instead is something unique and special - their perspective and talent. 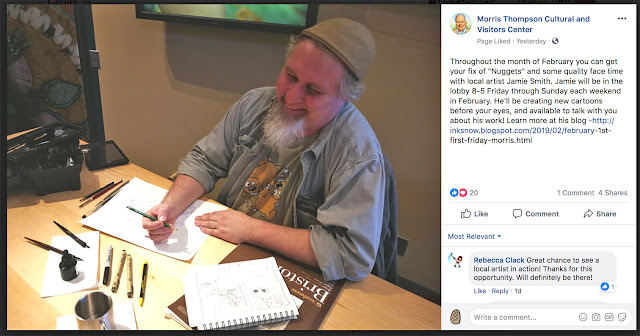 All this presupposes the creator has a personality that isn't just a visual artist but more of a performing artist. And that's a zone a lot of practitioners might not be familiar with - but it's an example of pushing out past the insular comfort zone a lot of us have. The instinct to avoid interactions is ofttimes second nature to introverts, and it can be so awkward - there's a fear of coming across as too pushy or arrogant. I see it as the second phase to making art - just get it out there, put it up and let it go. Another way to describe it is affecting the persona of an "egomaniac with an inferiority complex."


The line I used in marketing this experiment to the hosting folks was that it's not anything different than I'd normally be doing at home in the studio anyways, so why not just transplant the whole shebang every weekend for the entire month of the show? Not too many people ever get the chance to observe a wild Alaskan artist at work... and it's a mutual moment to invite strangers into sharing not just the work itself, but opening a little window into the process itself. In the end it was a great experience with wonderful folks in an amazing venue. 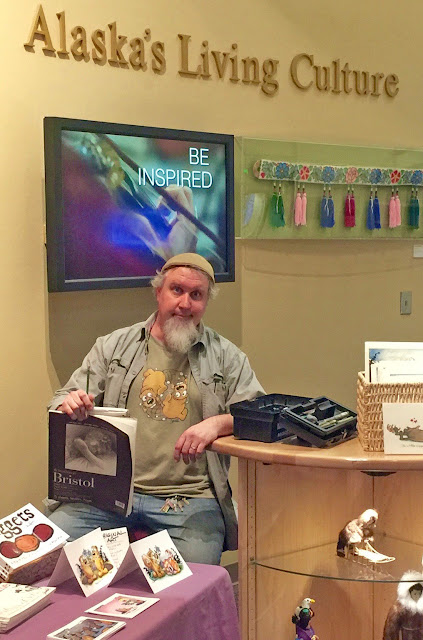