Out Standing in My Field 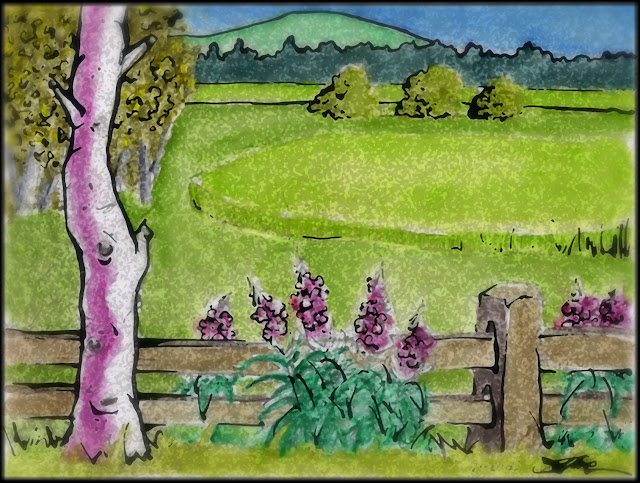 So it's always a good sign I'm retreading material when I plug in a term on the Blogger search box (upper left corner of this page), like for instance "Creamer's Field," and get no end of backlinks. But every so often I do occasionally glean a new perspective on a topic or issue. One supposes that might account for the peculiar obsessive traits exemplified by artists. - the recurring chance to make things better. The commitment expressed when saying a work is "done" still doesn't mean a do-over isn't possible (especially when manipulating digital files from the archives) but it might be awkward retouching a piece when it's hanging on someone's wall. Somewhat similar to a chef cranking out their creations in a kitchen you just gotta get used to letting each piece go when it's time to serve it up for someone else's enjoyment and consumption.

Not too long ago I remember being somewhat astonished at the display of crestfallen looks that appeared on a group of student's faces when I blithely quipped "... and if you mess up or don't like the direction your drawing is going, just trash it and start over on a new one." I realized then that my experience with (comparatively) rapid production has had the side-effect of inuring me to treating my work like it's something special. Sure, it's worth something, but as far as the effort invested in creating it, that's such a given that it doesn't really factor in to the value equation (unless in a freelance capacity under deadline - then there's always a clock ticking).

So for me to summarily trash something even after wrestling with it for some time doesn't necessarily mean it's worth hanging onto. Any good writer will tell you not to fall in love with any particular turn of phrase or idea in the process of editing a good story. Similarly I have to laugh at the efforts of so many artists who go to ridiculous lengths to recreate something that they initially sketched out and wish to preserve the original spontaneity of the image through an elaborate system of photocopying and/or tracing over light-tables etc. I always just redraw it anew. 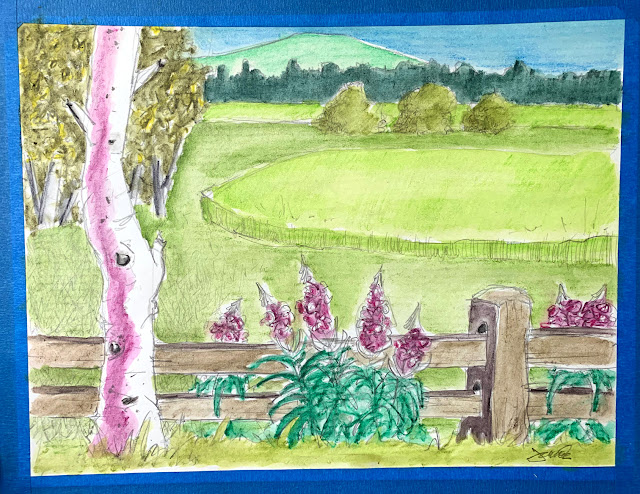 All of this is to say when I led the annual flock of fledgling artists out to one of my favorite places to sketch I dismissed my own efforts at creating a field sketch with this one particular demo. This is both the time and the place where students in my drawing class get a chance to figuratively spread their wings and apply everything we've been practicing on back at the studio out in the real world. Observation skills are coupled with rendering ability and there is also an additional consideration on how to translate reference sketches into finished works, how to incorporate our "visual notes" dutifully recorded in sketchbooks while on our roster of field trips. And just like any other exercise I will always show how (not why - except for the Advanced folks grappling with the big existential questions) to do exactly what I'm asking to be done. And again, just like innumerable instances proving the point, I will frequently crash & burn right there in front of folks. I suppose that is the confronting the greatest fear of any artist who doesn't want to become essentially a performing artist - not just of failure in private. But I personally find it to be an important lesson - one well worth any fleeting public embarrassment: working through failure is of crucial importance. Not to mention this is another practical benefit, besides the practice, of making many, many pieces - it increases the odds that at least one will be a keeper. 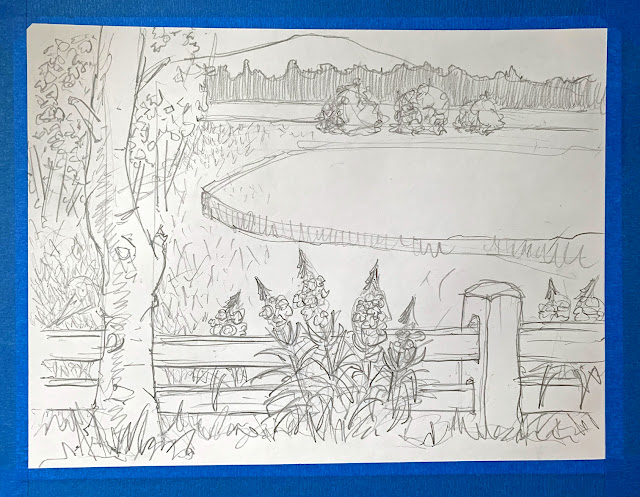 Now this piece in particular was, in my learned opinion, a total loss. At every step of the way past the initial (literal) field sketch I just seemed to keep botching it badly. I thought to myself "well, just add some watercolor,' then that became "well, how about some ink," then "maybe the computer can fix it." The pencil was fine, as it did showcase my frequently lectured-about principles of compositional arrangements of foreground/midground/background elements on the ground plane, and also the concept of visually sampling and then "remixing" these elements for a successful illustration. But the colors - ick. And so on. The final blow is the Photoshoppy filtery result posted up atop. There's always gonna be someone who it reaches though, as evidenced by the positive reaction from some folks - even those whose opinion I normally defer to. So this one's for them.